Now that you’ve chosen an appropriate rig, tuned it up, and muffled unwanted overtones, you’re ready to dial in that perfect drum sound and get to work on your hit record! In Part 2 of this Pro Studio Tips Series, we’ll discuss how to get the right mix in your headphones and the best way to approach working with a click track.

Using headphones in a recording session can be a very different experience from playing live onstage with a monitor wedge. It’s important to choose a comfortable pair that fits snugly but isn’t too tight. Some drummers prefer “closed” headphones which don’t let any outside noise in, while others like “open” ones that aren’t fully airtight and allow you to hear a bit of yourself in the room. It’s largely a personal preference, and it’s good to experiment with different types to see what works best for you.

If you know you’ll be playing on the louder side, closed headphones are a good choice to keep the noise out while quieter playing lends itself to either type. Don’t be afraid to ask the engineer for another pair if the ones you have aren’t working for you. You can also buy your own studio-caliber headphones and bring them to the session. If you decide to go that route, make sure you choose something that is professional quality and has a good bass response (earbuds are not usually a good choice unless they are top-quality in-ear monitors).

In addition to a selection of headphones, most modern studios are equipped with personal headphone monitor boxes that will allow you to control your own mix from behind the kit. The engineer will position this monitor next to your drums and route each instrument (including you) to a separate channel so you can easily turn things up and down. There will also be a separate channel that controls the overall volume, as well as another for the click track if you are using one (more on that later).

Once the engineer gets everything wired up, it’s a good idea for the whole band to play together so everyone can check the levels of their monitor mix. As a drummer, the most important person in your mix besides yourself is usually the bass player. One of the most important elements of successful recordings in any genre is a tight rhythm section, and if you can’t hear the bass player, it will be very hard to lock in the groove. Once you’ve got the bass and drums dialed in, you can start adjusting other levels, including guitars, keyboards, horn, vocals and anything else. If there are a lot of background vocals or other less important elements, you may want to keep them lower in your mix so you aren’t distracted. Focus on the bass and the rest of the rhythm section.

During this band soundcheck, make sure to test your mix during both quiet and loud sections of playing. While it’s important to be able to hear everything clearly in the headphones, try to resist the temptation to crank your overall mix too high. If your headphones are too loud, it can lead to overplaying and bashing away when you record. It’s also a smart move to protect your hearing by wearing earplugs under your headphones. Disposable foam ones will work, but custom-made plugs that filter out damaging frequencies while allowing some sound in work better.

If the studio you are in doesn’t have personal headphone monitors, you will need to have the engineer adjust these levels manually from the control room. Even though you’ll be anxious to get started, it’s critical to take an extra minute or two make sure you can hear everything before you begin tracking. There’s nothing worse than ruining a good take because you didn’t have your mix dialed in properly.

Protect your hearing with EarDrums 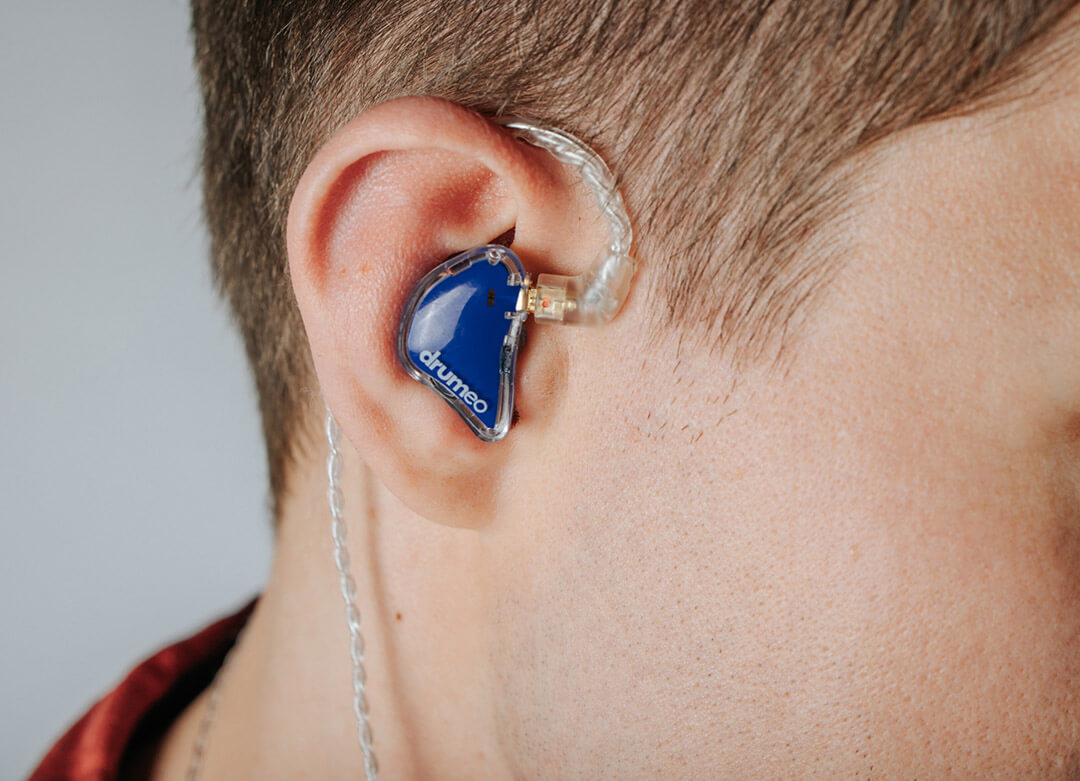 Keep loud sounds out while still listening to your favorite songs. Drumeo’s EarDrums are triple-driver in-ear monitors that seal in the music while reducing external volume by up to -29dB.

Pick up a pair and make sure you hear it all for years to come.

Now that you have your “cans” up and running, it’s time to start working with your click track. Not every musical situation requires a click, especially jazz and other improvised music. There are plenty of pros and cons to using one, but many pop and rock albums use a click track because of the flexibility it provides during the post-production and editing process. You can more easily fix mistakes, replace whole sections, and extend or shorten a tune. Most importantly, the click prevents you from rushing or dragging the tempo when you record.

Since being in the studio can be an exhilarating experience, it’s easy to count songs off too fast or speed up because of the extra adrenaline. Conversely, if you’re at the end of a long day or just after a lunch break, it’s human nature to relax and drag a bit. Using a click track will minimize the variation from these shifts and help your timekeeping to remain steady and consistent throughout the session. If you and your band are thinking of using a click, it’s important practice with one in rehearsal before you record. This will help you to choose the correct tempos for songs and get used to them before you get into the pressurized environment of the studio (this process is called “pre-production”).

Sometimes the tempos you choose in pre-production may suddenly feel too slow once you get in the studio, but it’s important to mitigate that excitement so you don’t end up with a bunch of overly fast renditions of the tunes that don’t turn out the way you want. If there are vocals, it’s critical to make sure the singer can clearly enunciate the lyrics at the tempo you choose. Just because a particular tempo may feel good for the drummer doesn’t mean it’s best for the overall song. It’s your job to make any tempo and groove feel good, and that’s why it’s so important to spend plenty of time at home working with a metronome before you go into the studio.

In addition to the tempo, it’s important for you to be comfortable with the tone of the click itself. Engineers can usually change this sound with the push of a button, so if the tone they’ve chosen is hard to hear or doesn’t cut through your mix, don’t be afraid to request a different one. Any woodblock-type sounds that aren’t too high or low-pitched are a good bet. You’ll also want to avoid tones with any sustain or overtones that can muddy up your mix, as well anything too shrill or piercing such as a cowbell. Some drummers prefer a click with an accent on the first beat of each measure (either a louder or higher-pitched tone), while others prefer a “flat” click with no accents. Also, if you are working with a very slow tempo, it can be helpful to have the click be twice as fast (on each eighth note as opposed to each quarter note). This should help lock in the tempo and avoid a “swimming” feeling that can occur when there is too much time between each click.

Whatever specific choices you make, be sure the click is comfortable for you and easy to hear in your mix. This sound will be burrowing its way into your brain the entire time you’re recording, so it’s worth the extra couple seconds to get it the way you want. After you’ve settled on a sound, you’ll need to adjust the level on your personal amp monitor. The click should be on its own separate channel, and some devices have a “panning” function that will allow you to send the signal to one side of your headphones. This panning can be helpful in avoiding a jumbled-sounding mix since you’ll be hearing a lot of different things at once. If the studio you’re working in doesn’t have personal monitors, you’ll need to work with the engineer to set the levels and panning exactly the way you want.

Once you actually start recording, the click can be your best friend or your worst enemy. If you’ve done your preparation and worked on the tunes at home at the correct tempo, hopefully you will be able to lock right in. It’s very common for drummers to “fight” with the click at first and get slightly ahead or behind. One advanced technique involves purposely playing slightly “on top” or “behind” the beat to create the right feel for a particular tune or section, however the first step is always to play “with” the click before attempting any of these higher-level manipulations. The key is to relax and focus on the groove first before attempting too many embellishments, which is one of the most important distinctions between playing live and recording. The best studio drummers in the world, in every style, have one trait in common: great time.

In Part 3 of this Pro Studio Tips Series we’ll look at the differences between live and studio playing and discuss how to play consistent parts and use proper dynamics. We’ll also go over how to make shorthand road maps which will help you learn songs quickly and make you more efficient and productive in the studio.

Rob Mitzner is a New York-based session drummer who has recorded for Billboard Top-10 charting albums, films and Broadway shows, performing live at Lincoln Center, The Smithsonian, Caesar’s Palace, The Blue Note, Boston Symphony Hall and for President Obama in his hometown of Washington D.C. He is currently working on a drum book with Hudson Music and has also been featured in Downbeat Magazine and Modern Drummer, and on the national TV show “Trending Today” on Vice. Rob holds a B.A. in Music and Political Science from Brown University, and is a proud endorser of Paiste Cymbals, Remo drum heads, Hendrix Drums, and Drumdots.

Heather Thomas  /  Practice Tips
5 Tips For Drumming And Singing
If the idea of singing while drumming stresses you out, let Heather Thomas show you how to make it feel and sound natural.

Brandon Toews  /  Drum Beats
The 20 Most Recognizable Drum Beats Of All Time
These are the most recognizable beats of all time - which means if you heard a drummer playing, you'd probably recognize the song.