Drumeo is a unique online learning experience for drummers. It was designed to provide inspiration, education, and community support. The website launched to the public in February 2012, but the original ideas started to take shape ten years before that. Here, told for the first time, is the story of how a farm boy teamed up with a high school dropout to change the way people learn to play drums. 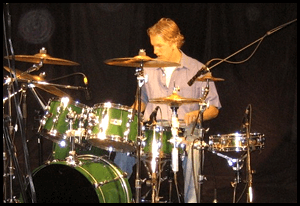 In 2002, Jared Falk was teaching private drum lessons, touring as a musician, and working on his family farm. Rick Kettner, after dropping out of school to work for Internet startups in the late '90s, was filming simple video lessons for online drum forums. Both were ambitious and looking for a way to make a living pursuing their passion of playing the drums.

Jared and Rick first met through Lionel Duperron, a drum instructor they had both taken lessons from in the past. After getting together for the first time and discussing a few ideas, they quickly realized this was a unique opportunity to combine their strengths. Jared was an experienced drum instructor and Rick was skillful in creating and marketing downloadable videos.

Within a year they launched their first online community at BreakSticks.com. It was a simple website with drum articles, video tutorials, and a community discussion forum. Soon after that, DrumTechniques.com launched as an online store where drummers could purchase their downloadable lesson packs.

Up until this point, everything was being done in Jared and Rick's spare time. The products were all being published as downloadable videos with printable PDFs - and drummers were responding with positive reviews and valuable feedback. As things began to grow, Jared and Rick realized it was time to make things 'official'. The first step was to create an official business name.

Nobody really knew where things were going, so they wanted a name that was open to many possibilities. After brainstorming several ideas, Rick jokingly suggested "Railroad Media" with the explanation "because we train people". For some odd reason it stuck and Railroad Media, Inc. was established in December 2005. 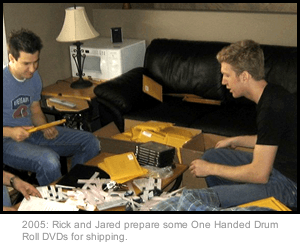 Rick was the first full-time employee and within two months Jared was able to join full-time as well. A short time later, two of Rick's brothers joined the team: Jordan Kettner as a full-time video editor and Michael Kettner as a sales rep. The small team worked out of Jared's house, where Rick was living in the basement suite.

With the growing team and new capabilities, everybody wanted to produce and distribute higher quality video drum lessons. Though the downloadable lessons were valuable, the team wanted to improve the learning experience with multiple camera angles, better video quality, and much more. Since online video technology was still in its infancy - as sites like YouTube hadn't taken off yet and high quality streaming wasn't possible - the decision was made to move into DVD-based lessons.

However, while the new products were very exciting, this was also a rocky time in the company's history. The business was rapidly changing as the team moved into unfamiliar territory. It was no longer about publishing lesson packs online - now there were bigger production costs, distribution decisions, and marketing challenges.

Rick and Jared barely managed to keep the business running, needing to borrow money from friends and family members to stay afloat. With maxed out credit cards, they were able to produce the first 1000 copies of The Rock Drumming System. In the first two days of the launch, the The Rock Drumming System brought in more sales than the entire previous month. This was a critical turning point for the small company, allowing it to once again be headed in a positive direction. 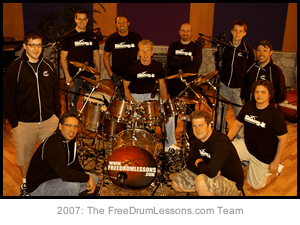 Online video streaming was starting to improve and sites like YouTube were quickly growing. Jared and Rick had always wanted to offer online videos, but the quality and reliability still wasn't good enough to deliver a solid product or service. So they decided to launch a free resource instead - as a way to give back to the community and showcase the value of their drum lessons.

After a year of development, FreeDrumLessons.com was launched to the public in the summer of 2007. It featured over 70 video lessons which covered a wide range of beginner-to-advanced topics. Up until this point, the majority of online lesson content was in text or sheet music format. FreeDrumLessons.com was the first website to have a comprehensive library of video drum lessons.

While the team was confident that its step-by-step training packs would still appeal to students looking for high quality DVD-based lessons, there was a concern that this free resource might cannibalize sales. It didn't. The drumming community loved FreeDrumLessons.com - and still supported the step-by-step training packs as well. All the hard work had paid off to create a true win-win situation. 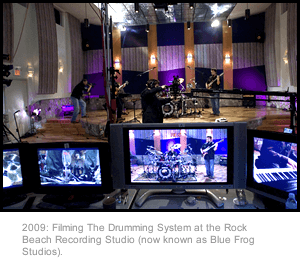 It didn't take long for the team to outgrow the workspace at Jared's house. In 2007, they moved into an office with extra space for shipping and storage. And the team continued to grow: Jared's brother, James Falk, joined the video team; his cousin Jordan Dick was hired to do web development and graphics; and a close-friend, Dave Atkinson, came on to write and film lessons. Jared's and Rick's wives, Shanna and Gabby, helped with shipping and support, and Dan Klassen assisted with advanced programming.

At first, all physical products were stored on shelves within the workspace, but that didn't last for long. The growing demand forced the company to expand to the office space beside them, where the shipping and support team moved. As Railroad Media continued to grow, it became apparent that having an office on the 2nd floor, up a flight of 20 stairs, wasn't the best idea - but that issue would have to wait a couple of years before being resolved.

Next, the team set out on its most ambitious project to date - connecting with highly acclaimed drum instructor Mike Michalkow to create The Drumming System, a comprehensive collection of video drum lessons for all skill levels. The planning phase for this project took over 20 months. The Drumming System launched late in the summer of 2009. With its unique step-by-step approach - it has since helped over 10,000 drumming students from all around the world achieve their unique drumming goals.

With continued growth came the need for additional help. Victor Guidera, who did audio production for previous video shoots including The Drumming System, joined the team. Jeff Claassen initially joined to help with video production, but soon shifted over to help the growing web department. And Jared's sister, Jenn Falk, took the lead on managing shipping and support.

Within a few months it became apparent that the team needed more space. It was also time to solve the shipping and storage issues that resulted from being in a 2nd floor office space. So, the team found a new location. This was a substantial move that set things up for years of future growth and new possibilities.

With Victor's leadership in the production department, Railroad Media created an in-house studio. It started out with minimal gear as a simple way to film individual lessons, but quickly evolved to become a place for filming entire video training packs. This forever changed the way the team would create and publish videos.

It was around this time that technology was finally catching up to the original vision for producing high quality online instructional videos. Streaming video was becoming cost-effective and both the video and web teams were steadily building up experience. Everything was coming together and the decision was made to do something very special: create online editions for the existing training packs. 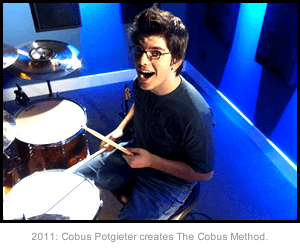 The Drumming System was the first to get the new "online edition" treatment. This online edition allowed students to access all of the original content (20 DVDs, 15 CDs, and 5 workbooks) directly through a website - from anywhere at anytime. Better still, the website included all-new interactive features that allowed students to post questions, comment on videos, and connect with each other.

Next, the new Bass Drum Secrets 2.0 pack was designed from the ground up to be an online solution. While the pack was released in DVD format as well, many of the features were specifically designed for a web-based interface. This may seem like a minor point, but it was another shift in the way Railroad Media thought about creating and publishing video lessons. Many new ideas became possible and this paved the way for future innovations.

With the shift towards online video lessons, Jared reached out to Cobus Potgieter to collaborate on a potential project. Cobus had established himself as a creative and authentic musician on YouTube by publishing drum covers of famous songs, so this was a natural fit. Curiously enough, Cobus had never taken a formal drum lesson of any kind. So he created The Cobus Method training pack, where he explained his unique approach to playing drums entirely by ear. It launched in September 2011 and was an instant success - reaching over 2,000 drummers from over 70 countries in the first 10 days.


The Launch Of Drumeo

Up until this point, each of the online training packs had unique online interfaces on separate websites. Every individual release made improvements over the previous designs, but this lead to inconsistent experiences for customers who owned multiple packs. So, with this in mind, the team set out to unify everything under a single platform. This idea paved the way for the first version of "Drumeo", which stands for "drum education online".

Drumeo was a complete game-changer. It unified everything. The website allowed students to browse all of the training packs in one place - as well as take part in a new community discussion forum. 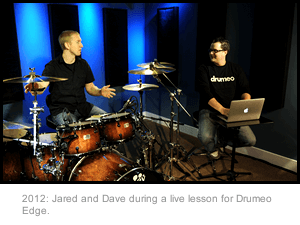 All the while, the team continued to expand to meet growing needs. Trent Harms joined the video team to assist with editing, Kyle Trienke joined the audio/video production team, Kenton Hirowatari joined the web development team, Hugo Almeida joined the content production team, and both Jessica Tierney and Megan Lepp joined the shipping and support team.

Within a few short months it became apparent that the "Live" title didn't accurately describe the value of Drumeo, which also offered access to the Drum Lesson Library, Drum Play-Alongs, Student Reviews, and other exclusive tools. So "Drumeo Live" was rebranded as "Drumeo Edge", since the service aims to give students a unique edge for achieving their drumming goals.

Jared and Dave Atkinson shifted roles to spend more time teaching live lessons; and Nate Savage joined the team as the resident guitarist to produce play-along songs and co-host live lessons. Rick's brother Chad Kettner was added to the marketing team to help spread the word about this growing community.


The Future For Drumeo 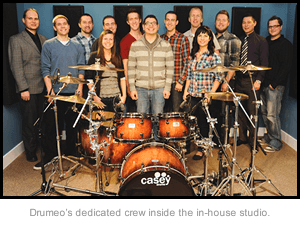 Jared has been leading the effort to add remote 'satellite' instructors, with early additions including Aaron Edgar, Jai Es, and Rob Litten. You can expect to see more instructors from around the world join the team to provide more value to this vibrant community. Who knows, one day there may be enough instructors for students to be able to tune-in anytime of the day or night to watch a live video lesson.

While there is always a measure of uncertainty with the future - due to technological changes, shifting trends, and new ideas - the team at Drumeo is excited about what's to come. You can expect Drumeo to continue offering creative solutions to meet the practical needs of drummers. Helping drummers was the focus from the start - and will always be the top priority in the future.