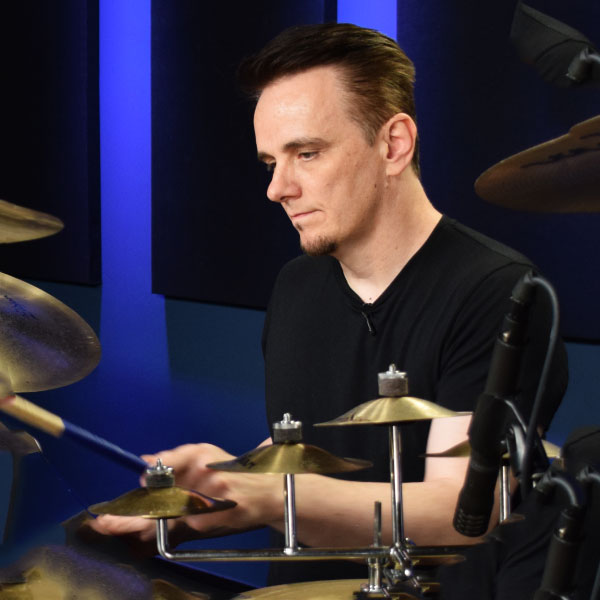 Gavin Harrison Is Your Drum Teacher

Gavin Harrison is best known for his playing with progressive rock bands Porcupine Tree and King Crimson. He began working professionally in 1979 and has since appeared on over 140 recordings. He's performed and/or recorded with a wide variety of artists including Incognito, Lisa Stansfield, Lewis Taylor, Paul Young, Iggy Pop, OSI, Shooter, The King Of Oblivion, Sam Brown, Tom Robinson, Go West, and many others.

He won the Modern Drummer magazine readers' poll for "best progressive rock drummer of the year" from 2007 to 2010 (and again in 2016), as well as "Best Prog Drummer" from DRUM USA magazine in 2011. In 2014, Modern Drummer placed Gavin in the Top 50 Greatest Drummers of all Time.

Gavin’s Go-To Grooves, Yours For Life!

Sign up on this page and you’ll get 8 videos with Gavin Harrison that are normally reserved for Drumeo members.

5 Porcupine Tree Grooves
You’ve heard the grooves, now you can learn them from Gavin himself!

1 PLAY-ALONG SONG
Get a full play-along song that Gavin put together with multi-instrumentalist 05Ric.

Is this really free?

Yes! We love sharing videos to help drummers -- and deep down we hope you’ll see some of the value that we provide inside Drumeo juuuuust in case you ever want to consider joining!

Why do I need to give my email address?

Secretly, we’re hoping to start a relationship with you. This is our way of saying “Hey we create awesome drum lessons, can we show you?” Don’t worry, we won’t send you spam or share your email address with anybody else. You’ll get exactly what’s promised on this page along with ongoing drum videos, free lessons, and some special offers. And if you don’t like our emails, you can unsubscribe at any time.

The Grooves Of Porcupine Tree


By signing up you’ll also receive our ongoing free lessons and special offers. Don’t worry, we value your privacy and you can unsubscribe at any time.

You should receive an email from team@drumeo.com within 10 minutes. If you don’t, then check your spam folder or re-enter your email address again.

We're emailing you the link to Gavin's free course.

If you don't receive the email within 10 minutes, check your spam folder or refresh this page to re-enter your email address again.