When It All Comes Full Circle

The very first show I ever attended was The Backstreet Boys.

I was six years old and went with my family to a huge outdoor pavilion called Montage Mountain in Scranton Pennsylvania.

I grew up two hours away in a town called Jersey Shore (not the Jersey shore) and it was the closest amphitheater to us. All the big tours came there, so we’d have to drive out to see them.

It wasn’t until I was around 12 years old that I discovered rock and metal. I was playing Guitar Hero and found the song “Six” by All That Remains.

I was like, holy shit. I don’t even know what I’m hearing right now.

I quickly got into bands like Arch Enemy and As I Lay Dying. I started getting more into drumming and listening to scene and metalcore stuff like Bring Me The Horizon, Chiodos, August Burns Red.

It changed my life entirely. It became a large part of my personality. And it made me want to get better at drums.

As a 12-year-old, I was mesmerized by Matt Greiner from August Burns Red and Aaron Gillespie from Underoath. I’d completely copy their drum setups and look up to their musicianship. And I started going to Warped Tour at Montage Mountain to see my favorite bands, driving down every summer from age 12 until age 19 when I joined Motionless In White.

Right after high school, one of my bandmates, George, lived with a former member of Motionless: Josh Balz. I would go to their house and I became friends with Josh too.

When Motionless was parting ways with their drummer, Josh was like, “I know you can play drums. I’ve heard you on your other stuff with George. Would you want to try out for us?”

I kinda brushed it off at the time. The band had two albums out and I’d never even heard one song. I was thinking, man, I don’t wanna play for a band I don’t know.

So I sent them a video of me playing a couple of their songs. Immediately they were like, “Yo, let’s do something!” They invited me to come tour with them – my first tour ever – in Australia doing the Soundwave Festival circuit.

It was insane. I’d only been out of the country one time before. I dropped out of college, and two weeks later I went to Australia. I haven’t looked back.

The first time we played Warped Tour at Montage Mountain in 2014, it felt like a dream come true. I always viewed this place as hallowed ground where all the coolest bands played. There were so many familiar faces – friends, family, people I grew up with and went to elementary school with. I felt my life was made.

We opened for Slipknot there in 2015 and played Warped Tour again in 2016 and 2018. Every time I got to play, it was a cooler experience. Going from watching from the crowd, to being friends with the bands, to getting to open on that stage…

I never expected to headline it.

While we were planning our recent tour, Chris [Cerulli, vocalist] was like, “I’m really pushing to try and get a set at Montage.” It was up in the air for a while.

But when it was finally booked, I was extremely excited. It didn’t hit me at first, but as it got closer I was like damn, I cannot believe that we’re doing this. This is unreal.

Montage Mountain isn’t just important to me – it’s important to the band’s history as well. Motionless In White was playing there during Warped Tour on one of the local band stages when they were discovered by the guy who ended up managing them. And that kickstarted everything.

I got to see my family and all these hometown people at the show. It was one of the biggest crowds we’ve ever headlined for and I knew so many people in the crowd. But I wasn’t nervous or anxious – I was just so ready to do the thing.

We went out there and I had such a good time. We have a song called “Masterpiece” – our biggest song right now – and Chris stopped singing and started shaking his head because the crowd was so loud while they sang the chorus. It was incredible.

Before I was in the band, I would practice every single day like I was going to get ‘the call’: a band inviting me to tour with them around the world. I always had that in the back of my mind.

But people have to like you, too. You can be the best at your instrument, but if you don’t click with others it means nothing. A large part of this world is about networking, and I was always trying to meet the right people and make friends without being overbearing.

Still – practice your ass off as if you’re going to get that call tomorrow.

And I eventually got to be a part of it. 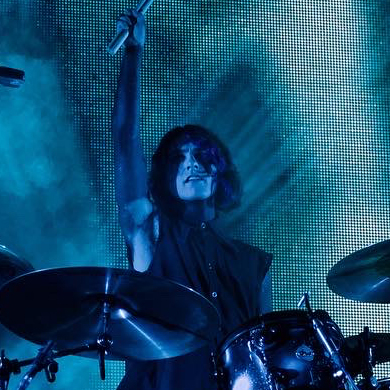